You are here: Home / Blog / Dodgertown gets historical marker 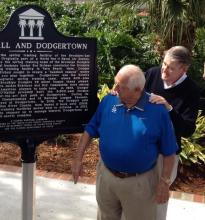 Dodgertown, which for decades was the spring training home for the Dodgers (both the Brooklyn and Los Angeles versions), got some long-overdue recognition Monday when it became an official Florida Heritage Landmark. The historical marker was unveiled during a ceremony at noon in front of the conference center.

O’Malley praised Ruth Stanbridge, a former county commissioner, for her efforts to get the designation approved at the state level.

The complex is now known as Historic Dodgertown and is a venue for a variety of youth sports.